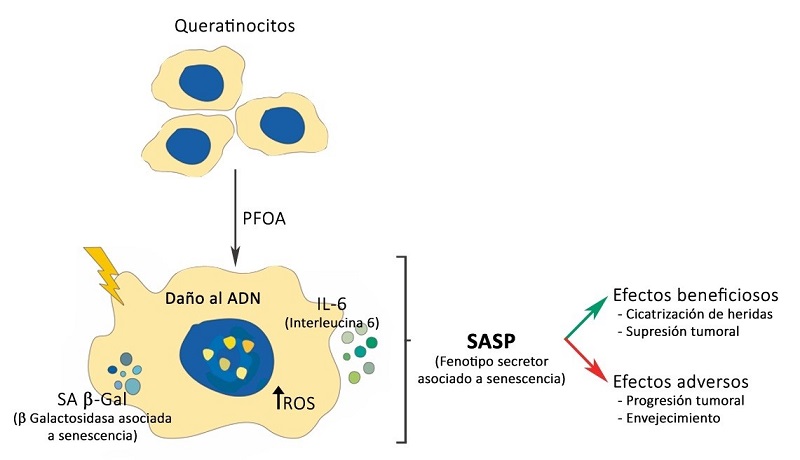 Perfluorooctanoic acid, a compound that is used in many everyday products, finds itself today on the list of emerging contaminants. In a recent study published in Food and Chemical Toxicology, researchers from the Universidad Autónoma de Madrid (UAM) warn that contact with this compound can leave an imprint on epidermal cells, the long-term, human health implications of which should be studied in depth.

Different epidemiological studies have been warning about the possible correlation between daily, involuntary exposure to low levels of emerging contaminants (ECs) and the growing rate of certain pathologies, such as neurodegenerative diseases, alterations of the respiratory and immune systems, metabolic and endocrine disorders, and even certain types of cancer.

A chemically heterogeneous group of compounds are considered emerging contaminants, the most salient of which are medications and personal hygiene products, bromide-based fire retardants, phthalate esters, drugs of abuse, perfluorinated compounds, and nanomaterials.

This has led some ECs to be included in the lists of priority substances, deemed particularly dangerous for human health or for the environment. This group includes perfluorooctanoic acid or PFOA, also known as C8, a perfluorinated compound that has played an important role in several industrial sectors since the end of the 40s.

Due to its physical-chemical characteristics, which include resistance to friction and heat, as well as its capacity to repel water and oil, PFOA has been used in any number of consumer products, such as clothing and leather, rugs and upholstery, kitchen utensils and food packaging, cosmetics, cleaning products, and fire-fighting foams.

A recent work, carried out by the group of Cell Toxicology at the Universidad Autónoma de Madrid (UAM), examined the cytotoxic effects caused by skin exposure to PFOA. The results, published in the Food and Chemical Toxicology journal, show for the first time that occasional exposure to a moderate dose of PFOA appears to be sufficient to rupture the double helix of DNA, a dangerous kind of injury to human cells.

In their work, the researchers used an in vitro model of human keratinocytes, the cells that predominate in the epidermis, which is the most superficial layer of the skin.

“We found that, even after an 8-day recovery period in the absence of the compound, the injuries persisted. We also saw that the keratinocytes develop a senescence-associated secretory phenotype known as SASP. This implies that continuous exposure to PFOA is not necessary for the cells to suffer persistent damage," the authors point out.

The leading pathways of exposure to PFOA in humans are foods, drinking water, household dust, as well as skin contact with products that contain it. Despite the fact that the use and distribution of this compound is strictly regulated and restricted in both the European Union, as well as the United States since 2015, low levels of PFOA are still being detected in the majority of human populations in industrialized countries. This is due, in large measure, to the fact that once the compound has been introduced into the body, it is not metabolized and, on average, it takes 3½ years to be eliminated in urine.

In short, these results provide more information about the toxic effects caused by skin exposure to PFOA and warn that contact with said compound can leave a mark on the epidermal cells whose long-term implications for human health must be probed in depth.

There are experimental data in vitro, as well as in vivo, that prove that this senescent phenotype can promote beneficial or adverse effects, depending on their duration. Thus, for instance, when the SASP manifests temporarily, it fosters tissue regeneration and generates signals to eliminate damaged cells, enabling it to act as a tumor-suppressing mechanism.

However, the accumulation in the body of SASP-containing cells has a negative effect on the microenvironment of neighboring cells, contributing significantly to the appearance of chronic inflammatory processes related with aging and tumor progression.